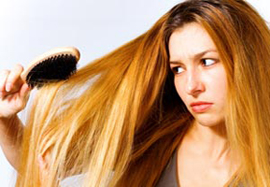 According to studies, over 40% of men between the ages of 18 and 50 have a medium to severe type of baldness. Its occurrence and intensity increase with age. Hair is important for a person especially in terms of social communication. Hair loss is often perceived by the victim as loss of one’s identity, a decrease in one’s attractiveness and an increase of one’s vulnerability. Men try to compensate this imperfection by adding other things such as a moustache, beard, big muscles and so on. Hair grows out of a root in the active stage lasting 4 to 7 years, when in fact 85% of all hair is in the growth stage concurrently . Daily loss of 50 to 100 hairs does not necessarily mean a disorder. The average speed of hair growth is approximately 1.2 cm per month. Hair grows the fastest in summer and the slowest in autumn and winter. More significant slowing of hair growth comes only after the age of 70. The male hormone of testosterone plays an important role in hair growth and also affects male behaviour, sexuality and the desire for power and aggressiveness. Under the influence of an enzyme (5-alpha-reductase), this hormone transforms into a highly active form of dihydrotestorene (DHT), which damages roots and shortens the active growth stage of hair on the top and crown of the head. Production of this hormone can also be driven by excessive production of hair sebum and its spread along the skin with scarce and insufficient hair washing. Although eunuchs (castrated men) have a genetic predisposition for baldness, they never were . Male hormones positively affect body hair growth (which is attractive to many women), but on the other hand, they adversely affect hair on the scalp. A certain appeasement for the unjustly bald can be the hypothesis according to which the phylogenetic development goes from a hairy primeval man to a hairless man of the future. Female hormones – estrogens – protect against hair loss, but their effect is less significant.

Hair follicles of most men begin to react during a certain point in life thus increasing their level of DHT in the body. With some men, hair loss may already have begun by the age of 16 to 23. The luckier ones begin to lose hair at the age of 30 to 35. Some men however notice hair loss only after 50 or even much later. The speed of hair loss with androgenic alopecia depends especially on the genetic predisposition to hair loss and the level of DHT in hair follicles.

If you have someone in your family who suffers from hair loss, you can anticipate that you may also lose hair in a similar way and at approximately the same rate. This family member can be from the father’s or the mother’s side. It doesn’t have to be a direct relative, but it might even be, for instance, a distant one, such as the brother of your grandmother. The amount of produced DHT in the body significantly affects the speed of hair loss. If the quantity of DHT reaches the point of sensitivity of your androgenic receptors, the hair begins to fall out. The more DHT the body produces, the faster the hair thins and falls out. Men first begin to lose hair on the sides of the scalp thus causing corners \to form. The corners gradually become bigger and bigger and then the hairline area begins to thin. This stage may be accompanied by hair loss in the back of the head in the vertex area. Gradually the patches of hair loss get bigger. Hair that covers the sides and the back bottom part of the head (typical shape of a horseshoe) is usually resistant to the effects of DHT in the whole course of a man’s life. That is why most men do not lose hair in these areas.

Feminine hair follicles are very sensitive to changes of hormone levels in the body. Hair loss may be caused by even the slightest, minor or sudden change of the hormone levels. A great intervention in the hormone levels of the female body is pregnancy and birth, after which the body has to recover and gradually restore the lost hormonal balance. Hair loss is also often related to the use of hormonal contraceptives. It may occur after onset, offset or incorrect use of contraceptives. Increased hair loss can also represent a start of menopause, when the ovaries activity begins to fade. As with man, the speed of hair loss with female androgenic alopecia especially depends on the genetic predisposition to hair loss and the level of DHT in hair follicles. Your direct and indirect relatives will give you the best idea of what you can expect with hair loss. The manner and the rate of hair loss are to a great degree hereditary from the mother’s side as well as from the father’s side. If for instance your grandmother’s cousin also experiences hair loss, it is likely that you will to a great extent copy her hair loss.

The rate of hair loss escalates depending on the amount of DHT produced by the female body. A low level of the aromatase enzyme in the body contributes an increased rate of hair loss. Aromatase is the enzyme responsible for the production of the female sex hormone estradiol, which also prevents DHT production. Women usually experience overall hair thinning near the crown of the head. Hair gradually thins down and falls out until the skin gradually begins to show through the hair. The hair on the sides and on the back of the head does not fall out and preserves its density, thickness and quality. The second type of hair loss with women begins with formation of a thin bald path in the middle of the head. The bald path leads from the forehead through the middle of the head to the vertex area. In the beginning, this path is narrow and it is difficult to find. However it gradually expands to the sides and it forms one large bald area on the head. Occassionally, but rarely, women might also experience hair loss starting at the hairline area progressing to the crown of the head.