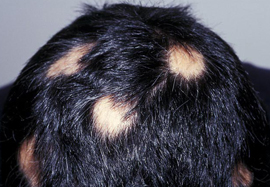 Alopecia areata is a very unpredictable autoimmune skin illness, which leads to spot hair loss on the scalp and to formation of bald areas. Alopecia areata is often present for several members of the same family and within these families other autoimmune illnesses may also evolve, such as pernicious anemy, lupus erythematosus and vitiligo. It often occurs with patients with a chromosome disorder, for example Down syndrome. Alopecia areata afflicts approximately four million Europeans of all age categories regardless of their ethnic origin.

The essence of the illness is that by some external or internal influence the cells of hair follicles change, which the immune system consequently identifies as alien and begins to create antibodies against them, to destroy them. The immune system cells – leucocytes – attack the fast growing cells in the hair follicles, where hair is formed. Hair first stops growing and then falls out of bulbs. That may occur at any age and afflicts 1% of the population, most often children. The afflicted persons have small hair follicles, which drastically slows down their hair growth. People with alopecia areata more often suffer from thyroid illnesses, atopic eczema, allergic cold and asthma. Alopecia areata is not an infectious disease and is not caused by nutrition. Just as with many other health problems, it sometimes begins after a stressful event, but it doesn’t always have to be the case. It is not a life-jeopardizing illness and does not cause physical pain, but from an emotional perspective it can be very difficult. Alopecia areata is most often discovered while visiting the hairdresser because, in most cases, the initial loss is hidden.

The primary symptom of alopecia areata is round bald spots – patches – on the scalp. The first symptom most often appears with small children or possibly adolescents, but the illness may break out at any age. Hair loss may affect various parts of the scalp and it may happen that, at the same time when hair falls out at one place, it might start to grow from another. Any hair surface may be affected including eyebrows, eyelashes and the moustache. Sometimes the illness is accompanied by itching, pricking, pain or burning in the afflicted area. Some people with alopecia areata also have abnormalities on the surface of their nails.

Signs and symptoms may be the following:

Alopecia usually causes psychological stress and deterioration of mental health. Considering the fact that hair loss often leads to significant changes of visage, some afflicted persons begin to avoid social contacts and can even suffer from social phobia, distress and depression. In severe cases when it seems that the chance to restore hair growth is minimal, patients need to consult with an expert. There is always a chance to solve the problem or at least lessen the difficulties that accompany this illness.