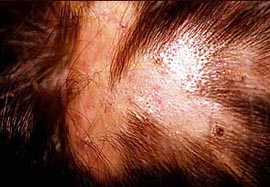 Scarring alopecia, or alopecia cicatricielle, is among a group of illnesses which causing scarring of the scalp and consequently hair loss. Hair loss caused by scarring alopecia is in most cases permanent where destroyed hair follicles are replaced with scar tissue. This illness may afflict both genders. Alopecia cicatricielle represents approximately 3% of all the cases of alopecia.

Scarring alopecia is divided into two forms – primary and secondary.
In case of the primary form, hair follicles are destroyed by immune system cells such as neutrophils and lymphocytes and may be related to an autoimmune illness. It is presumed that scars occur when stem cells and sebaceous glands, which are located in the upper part of hair follicles, are destroyed by an inflammatory process. This type of scarring alopecia can be further divided in additional categories depending on the specific type of the cell inflamed in this process.

Besides gradual hair loss and scarred skin, scarring alopecia does not necessarily exhibit any other signs. Sometimes it is accompanied by symptoms such as itching and burning. Sometimes the itching caused by this illness can be very intense and severe. In the beginning scarring alopecia may cause small red patches on the scalp, which may spread further as time progresses. When looking closer at the afflicted areas you can see that the bald areas caused by this illness have ragged edges. Besides these symptoms, blisters filled with liquid or pustulas may form in the afflicted area.

Characteristic signs of scarring alopecia are very helpful when determining the diagnosis of this illness. However, in order to confirm the diagnosis, physicians require tissue biopsy, which will discover the type of inflammation and the type of scarring alopecia. Together with the biopsy and a full diagnostics of the afflicted skin area, a detailed analysis of symptoms and also screening of a sample of the fallen out hair is also required. The method of treatment for scarring alopecia depends on what has caused it and on the ascertained condition of the illness.