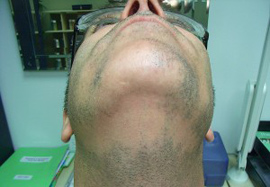 Alopecia barbae is the loss of hair on the chin and moustache. It appears on the face as characteristic small bald spots of round shape. It is a type of alopecia that belongs in the same catagory of hair loss as male baldness. Even today, the cause of facial hair loss is still remains somewhat of a mystery. No one knows why alopecia barbae starts, but it is presumed that it is an illness invoked by the immune system. The immune system attacks facial hair follicles (beard and moustache) and causes the hair production to stop. The hair follicles and roots get inflamed and the hair may fall out even just several days after the initial inflammation. Alopecia barbae is a relatively scarce type of alopecia areata. Including all the cases of alopecia areata, only 2% of people are diagnosed with alopecia barbae.

Alopecia barbae is not a serious illness and does not affect the overall physical health of the person who is afflicted . However, it may adversely affect the mental health of the afflicted male and, due to this, severely decrease his quality of life. People tend to think that patches on the chin can mean a serious illness and therefore often react in a negative way despite the face that it does not represent a serious physical health problem. Due to fear of transmission, they might choose to avoid afflicted individuals thus resulting in psychological stress for those with alopecia. Many men solve this problem simply by shaving off their beard and/or moustache daily.